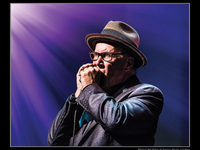 Mark Hummel started playing harmonica in 1970 and is considered one of the premier blues harmonica players of his generation. Hummel is a road warrior - a true Blues Survivor. Along the way, he has crafted his own trademark harmonica sound - a subtle combination of tone, phrasing and attack combined with a strong sense of swing. Mark has been with Electro Fi Records since 2000, releasing five CDs. Thanks to Mark's earlier albums, constant touring and appearances at the major blues festivals, he's firmly established his solid reputation around the US and Europe. Mark will be joined onstage by Rusty Zinn on guitar, Mike Law on bass, and Nik Toscano on the drums.

The show will be outside unless inclement weather forces us in.